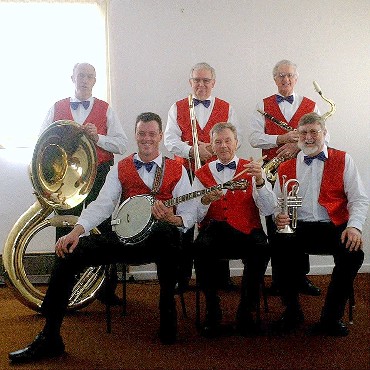 The Valley Stompers Dixieland Band was formed in late 1969 out of the remnants of the Six and a Bit Band led by George Blacket. Four members of that band formed the Valley Stompers, with the intention of creating more traditional jazz, and started rehearsing at the Randwick Archery Club building in Petone. The foundation members were Ray Heath on clarinet, Mike Green on trumpet, George Watson on trombone, and Peter Harrison on drums. Colin Heath (Ray’s brother) soon joined on string bass and Max Winnie soon completed the line-up on guitar and banjo.
The band’s first gig was at the Paraplegic National Games held at Scots College, Wellington on 1 April 1970 and was very successful. Later that year, Vince Gray joined the band on clarinet and alto sax, then the front line remained unchanged for the next 12 years.
The decade of the 1970s was a great time for building the band. There was a lot of work around, the front line was stable and developed a good repertoire with a solid sound. It was the era of live bands in hotels, before the introduction of disco and kareoke, and the band had several residencies, including the Provincial Hotel in Upper Hutt, Kings Cross in Lower Hutt, Grand National in Petone, Romney Arms in Wellington and an 11-year residency at the Western Park Tavern in Wellington from 1973 to 1983.

Though the front line remained stable during that time, there were several changes in the rhythm section. Bass players included Graham Hanify, John Wadd, John Keatly, Steve Castle, and Ron McNulty and the current Sousaphone player Roger Metcalfe, with Bill and Liz Armstrong and, more recently Chris Schnack filling in from time to time. Drummers included Mike Sellwood, Dean McGaveston, Ernie Lyons, Murray Walker, Stan Peters, Bill East (who doubled as vocalist), and Bob Little, with Frank Jackson filling in. Banjo players included Ted Linney, Arthur Parker, John Toogood and Randall Gibson. There were even vocalists: Jan Gale and Sue Gibson.
During this time, the band developed what was known as the Guest Bracket, when a portion of the programme was opened up to any musician who wanted to have a play. Every Wednesday night at the Western Park Tavern there would be two or three guest musicians including Ken Avery and sometimes members of his band (The Darktown Strutters), Chris Anderson, Jack and Betty Steele, Jan Morrrell, Dick Austen, and on one occasion, members of the Ray Price Quartet from Australia.
The Western Park became a regular haunt of students from Victoria University who came to enjoy an evening trad jazz with The Valley Stompers. Years later, the band is still approached by people reminiscing about their student days and how well they remember the band.
The 1970s was a boom period for musicians and the band enjoyed several engagements a week including playing at Wellington Polytechnic, Victoria University, society balls and functions, and several performances at Government House.
The residency at the Western Park finally came to an end in 1983, and by that time the music scene in Wellington had begun to change. 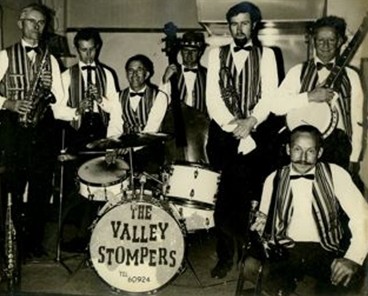 The era of live bands in hotels was coming to an end, as they were converting their entertainment to disco and karaoke. The band had been regularly involved in performing for telethons, but they were discontinued, corporate functions were curtailed, and the stock market crash in 1987 almost completely put a stop to live music entertainment, as budgets were cut. It was a difficult era for performing bands.
After a period of stability, the front line had several changes between 1982 and 2003. In 1982 George Watson left The Stompers and the band played without a trom for the next five years until Alan Roy joined in 1987, with Bruce Foster filling in. Mike Green and Vince Gray left in 1987 and Mike was replaced by Gordon Blishen on trumpet with Claude Hooper filling in from to time until 2000 when Mike rejoined the band. In 1999 Alan Roy left the band, and was replaced by the current trombonist Chris Caudwell. Randall Gibson left in 2002 and was replaced by Don Franks, who played banjo until 2005 and was replaced by the current banjo/guitarist Alastair Carr. Sadly, in 2003 the popular founding member, Ray Heath, died and was replaced by the current clarinetist, Mike Bain.
For some time there had been no drummer; this was rectified when Howard Thompson joined in 2006 and, with a full line up once again, the band was then able to restore the repertoire and sound of the trad jazz that had been popular in the boom years with updated arrangements and improving quality of performance.
The heyday of trad jazz in the 1960s and 1970s has not returned to the local scene, but trad still remains fun music to play and those audiences who appreciate good wholesome uplifting toe-tapping music still enjoy it, and there are still some opportunities for quality performances from dedicated musicians.

The Valley Stompers have some annual commitments, including having played an annual charity concert at All Saints Otaki for the last six years. 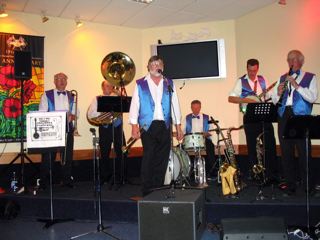 The Stompers play the standard selection of traditional jazz tunes with genuine on-the-spot improvising and imaginative use of mutes, and in recent times have expanded their style to draw inspiration from a wide range of artists including Jack Teagarden, Chris Barber, Sid Phillips, Kenny Ball, Muggsy Spanier and others.
Today, they play for enjoyment and hope to be around for the foreseeable future, giving enjoyment to the folk out front, and themselves alike.

FEEL FREE TO FORWARD US ANY JAZZ NEWS/HISTORY OR ANYTHING ELSE OF INTEREST TO OTHER MEMBERS (TO FEATURE IN THIS NEWSLETTER).

If you're reading this, this space could be promoting your business. Contact Mike Bain.