An evening of one of a kind jazz vocal duo classics. We’ve shuffled the pack and dealin’ out a hand of wildcards from jazz artists of all eras.
Lauren, Eugene and band will entertain us with a programme of classic jazz standards, a hand-picked selection of jazz vocal tunes from 1930's-1970's by artists such as Ella Fitzgerald and Louis Armstrong, Carmen McRae and Sammy Davis Junior, Betty Carter, Sarah Vaughan and Clifford Brown, Cole Porter, Jerome Kern, Tony Bennett ……….. the list goes on.
The tunes are mostly in the Swing vein. However, we have a lot of variety under the 'swing' sub-genre. We have a few Latin tunes and a really fun Calypso number too!
Some of the tunes we will be doing are 'You're The Top' (Cole Porter) 'I've Got My Love To Keep Me Warm' (Louis Armstrong), and 'A Fine Romance' (Jerome Kern) with a bit of a New Orleans twist to it.

Born and raised in Wellington, Lauren Armstrong’s voice is influenced by the style and character of 1920s New Orleans. Having graduated from the New Zealand School of Music (BMus) , she performs regularly in Wellington and around New Zealand with vocal group “The Victory Dolls” as well as leading her own jazz ensembles and is a fine exponent of ‘scat singing’. She regularly works alongside many local luminaries in the New Zealand jazz scene.
Bio: Eugene Wolfin:
Eugene completed his Jazz Performance Degree (vocals and piano) at the New Zealand School of Music in Wellington. Since then he has worked with many local artists of the Wellington jazz scene as well as guest starring as a vocalist with Roger Fox’s NZSM Big band, and in a musical tribute to the ‘Voice’ MR FRANK SINATRA. He has also appeared at the Wellington Jazz Club to rave reviews.

Bio: Oscar Laven: Saxaphone Oscar is an eclectic saxophonist and multi-instrumentalist based in Wellington, New Zealand.
A frequently appearing personality in the Wellington jazz scene, Oscar is a busy full time performer, composer and teacher with a Bachelor’s Degree in jazz and classical performance from the New Zealand School of Music. He has performed/recorded internationally and across the country with many ensembles including the Oscar Laven Quartet, Laven-French Quintet, his big band The Neo Hot Jive Orchestra, The Royal New Zealand Airforce Band, Orchestra Wellington, The Rodger Fox Big Band, New Zealand School of Music Big Band, National Youth Orchestra and Youth Jazz Orchestra, Black Spider Stomp, The Wellington City Shake ‘Em On Downers and many others.
Bio: Daniel Yeabsley Multi -instrumentalist is a Massey Jazz School graduate and multi-instrumentalist who plays the saxophone, bass, tuba, flute and clarinet. He has a distinguished career, performing alongside his twin brother, Christopher Yeabsley, in the aptly named ‘Twin Set’ as well as in bands such as ‘The Scribes of Ra’ and the Lap Steelers,’ ‘The Dancing and Drinking Society,’ ‘Shogun Orchestra’, ‘The Wellington International Ukulele orchestra’ and many others. He is also an instrumentalist on 22 recordings and counting.

Bio: Mike Jensen Drums lives in Raumati beach and is a drum teacher and musician who features on several albums and has played in a range of bands such as the Roseneath Centennial Ragtime Band (a 7 piece jazz, blues and swing machine playing original swing and second line music) Uprights Quintet (featuring his own original jazz and boogaloo music) , JellyRoll Blues and the Pussycat Dues, (honky tonk piano trio) and The Funky Beatles, (four jazzmen playing music from the Fab four). He studied jazz percussion at the NZ School of Music and achieved the degree in jazz performance plus the Postgraduate Diploma in Teaching in 2009.

Bio: Ayrton Foote Keyboard has a Bachelor of Music in Jazz Performance. Since graduating from Te Kōkī NZ School of Music he has performed a range of genres spanning from Jazz to Rock, to Latin to Pop – both solo and with some of the city’s most high-profile artists and groups.
Having been active in the local Wellington and wider NZ music scene for nearly a decade, he has played and performed with many high quality musicians and groups, such as: Rodger Fox Corporate and Big Bands, Caii-Michelle: The Voice of Aotearoa, The Wellington Mingus Ensemble, C-26 Salsa Band, Chocolate Thunder, and countless local Jazz projects, with the Wellington Jazz Festival being one of the highlight. He has also had experience working on cruise ships, and playing for Indian Ink Theatre Company’s 2017 performance of The Pickle King. 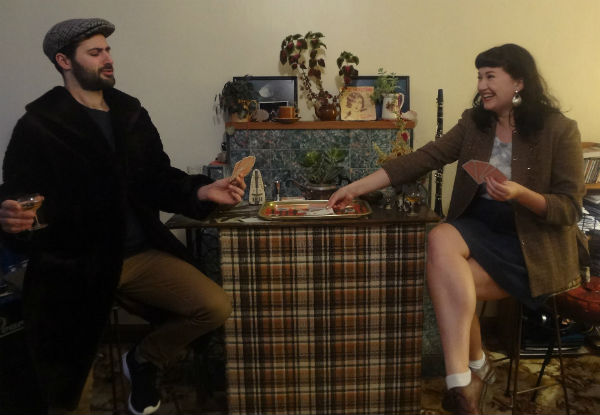