This gig is cancelled

The show is a homage to the life and music of Louis Armstrong, an American icon whose career spanned 5 decades. He was a pivotal figure in Jazz helping to shift the focus from collective improvisation towards solo performance. His trumpet acrobatics were unmatched at the time and are still incredibly difficult to re-create. He was also one of the few Jazz musicians who managed to cross over to the Pop music world with many hits that people everywhere still recognise.

The set will likely include such favourites as : 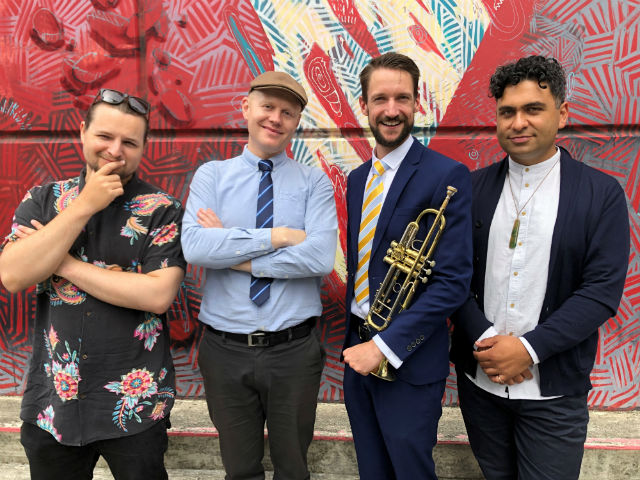 Michael Taylor is an accomplished musician who has travelled the world performing and has recorded extensively. He returned to New Zealand in 2017 after nine years in New York, where in 2009 he gained his Masters in Music from Manhattan School of Music with scholarships from the Manhattan School, AMP, Creative New Zealand and Dame Malvina Major. Mike has performed with Bobby Sanabria, The Tommy Igoe Birdland Big Band, Candido Camero, Taj Mahal, Matt Penman, Dame Malvina Major and The Roger Fox Big Band, among many others. He was the trumpet player for the Black Seeds for 2 years prior to moving to New York. Records that he has played on have been nominated for a Latin-Jazz Grammy in the USA, gone platinum in New Zealand, and twice won the Tui award for ‘Best Jazz Album of the Year’. Mike has played in Off-Broadway shows and has toured the USA with ‘In the Mood Live’.

Mike is currently an artist teacher at Te Kōkī New Zealand School of Music, where he teaches Jazz Trumpet, combos and the Latin Ensemble. Recently, Mike composed and organised an original fanfare for Wellington’s CubaDupa festival that saw 57 trumpet players of all levels come together to play. Mike performs regularly around New Zealand with various groups including The Wellington City Shake Em On Downers, The Richter City Rebels and his own Sextet.

Mike’s recent obsession with Louis Armstrong was kindled in part by a re-visit to Satch’s solo’s that Jon Faddis encouraged him to learn along with the passing of Mike’s first trumpet teacher, Warren Orr, a Taranaki Jazz icon who started the Jazz Club in Taranaki and was an avid Louis fan.

Despite the warnings of his high school music teacher, Hikurangi has now played the drums professionally since he was a teenager. He’s toured Europe, the USA and New Zealand endlessly, played at South by Southwest in Austin, Texas and has shared the stage with New Zealand pop legends including Lorde in Christchurch, Marlon Williams in Paris (France), and Lawrence Arabia in humble Wellington.

His experience as a touring and recording artist has seen him playing timbales in salsa groups, timpani in classical groups, and the drum set with various jazz orchestras including Rodger Fox’s Wellington Jazz Orchestra, The Wellington Mingus Ensemble, and the Arthur Street Loft Orchestra. He has played with countless small jazz and chamber ensembles including the legendary Tom Warrington from the Buddy Rich Big Band, award winning guitarist and composer Callum Allardice, University of North Texas 1-’o-clock Lab Band alumnus Brad Kang, and American-songbook exponents The Wellington City Shake-‘Em-On-Downers. His pop music credentials include working with Waikuku Beach folk-pop etheralists French For Rabbits, psychedelic crystal-gazers Glass Vaults, psychedelic crystal-grazer Aaron Tokona (Ahoribuzz, Weta) and Alda Rezende’s Samba Society. Music he recorded and performed with French For Rabbits has been featured on a number of supernatural, mainly vampire-based teen dramas including the Vampire Diaries.

Alistair Isdale has played music throughout New Zealand and abroad for the last 19 years. After studying his BMus in Jazz at Massey University, he proceeded to play bass for many artists including Brooke Fraser, Aaradhna, Rosita Vai, Bella Kalolo and The Richter City Rebels. With performances at the Waiheke Island, Tauranga, Bay of Islands and Wellington Jazz Festivals, Alistair has also worked with Orchestra Wellington and the Hawkes Bay Orchestra as well as playing seasons of Little Shop of Horrors and Miss Saigon. He has toured internationally appearing at the world famous Glastonbury Festival, the City of London Festival, the Sydney Festival, the Java Jazz Festival in Jakarta, and Divas in Paradise in Rarotonga. As a band leader Alistair has worked with popular covers band Electric Avenue who recently performed at the Whairepo Lagoon on New Years Eve.

Alistair’s other professional interest is sound engineering. He has recorded and mixed albums for Tessa Quayle, the Charmaine Ford Trio, the Royal New Zealand Air Force Band and Jazz Orchestra, Bella Kalolo, and Michael Taylor to name a few.

Concurrently with his work as a bass player and sound engineer, Alistair has worked as the Operations Manager for the Royal New Zealand Air Force Band for the last thirteen years. During this time he has had the privilege of leading the Royal New Zealand Air Force Jazz Orchestra which is quickly becoming renowned as one of the top bands in the country. Outside of music Alistair enjoys running and spending time with his cat Archer.

Ayrton has a Bachelor of Music in Jazz Performance. Since graduating from Te Kōkī NZ School of Music he has performed a range of genres spanning from Jazz to Rock, to Latin to Pop – both solo and with some of the city’s most high-profile artists and groups.

Active in the local Wellington and wider NZ music scene for nearly a decade, he has played and performed with many high quality musicians and groups, such as: Rodger Fox Corporate and Big Bands, Caii-Michelle: The Voice of Aotearoa, The Wellington Mingus Ensemble, C-26 Salsa Band, Chocolate Thunder, and countless local Jazz projects, with the Wellington Jazz Festival being one of the highlights.